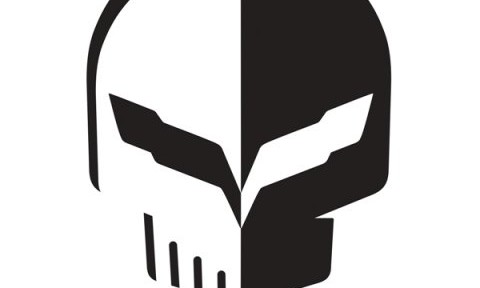 With the introduction of a new generation Corvette, the C7, it figures that a new Jake design would be in order.

Jake is the logo for Corvette Racing and featured a modernized skull with the corvette crossed flags as the eyes.

The C7.R (the full on racing version of the Corvette) will make its track debut at the Rolex 24 at Daytona in January, 2014.  This is the day after its unveiling at the North American International Auto Show in Detroit on Jan. 25, 2014. When the C7.R takes to the track, it will sport an all-new Jake logo, which has become the unofficial mascot of Corvette Racing.

The History of Jake

Jake first appeared in the early 2000s, when the Corvette Racing team was gaining momentum and winning multiple ALMS championships and the 24 Hours of Daytona and 12 Hours of Sebring. The team began uniting behind a rally cry of “Take No Prisoners” and a flaming skull logo that represented its unrelenting drive for victories.

It wasn’t until after the C5.R completed the final 24 Hours of Le Mans that the unofficial logo was born. Urban lore claims that the sketch started on a cocktail napkin as a skull with crossed flags for the eyes and was named after Jake, Jim Belushi’s character from The Blues Brothers.

Jake even was honored with Chevrolet concept car that was shown at SEMA in 2010.  It was based on a Grand Sport edition and was liberally covered with sedate Jake logos.

The new Jake, with the seventh-generation Crossed Flag logo for eyes, is more modern and more aggressive just like the C7.R will hope to be.