The Mecum Auction concluded their Chicago area auction last week, with the big seller being a 1963 Corvette originally gifted by General Motors to their famed car stylist Harley Earl.

A little known fact is that the Daytona 500 NASCAR trophy is named the Harley J. Earl Trophy; showing the impact this designer had in automotive circles.

While titled as a 1963, it has several touches from the 1965, like 4 wheel disc brakes,  and many one-off designs including a set of custom gauges in the passenger pod.  The exhaust pipes coming out the side cove is also a unique touch.  It has a 327 power plant and the requisite four speed. It generally is suspected to be a mule (or test car) and hence even rarer and more valuable.  The car was originally destined for the Chicago Car Show. but then re-deployed as well deserved thanks to an automotive icon. 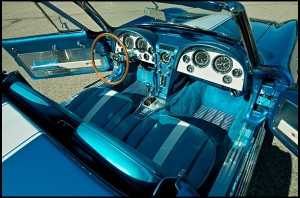 During the three days of car selling frenzy, covered by Velocity TV, 965 cars were offered up for sale with 615 hammered sold (that is nearly a 65% selling rate) with over $18 million in sales.  Like most auctions many cars are offered on “reserve” meaning if the bid doesn’t reach a certain set amount, the car is not sold.

Side view of 1963 Harley Earl Corvette

Custom set of gauges for Passenger Side of 63 Corvette

Side View of Harley Earl’s 1963 Corvette

So what do you think?  Did the buyer get a deal?